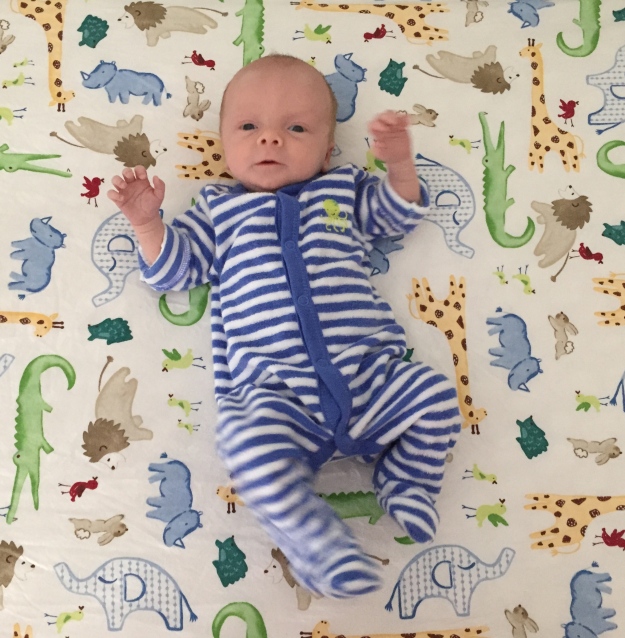 We officially have a one-month old! When I think about how much has changed from the day we brought Miles home until now, it’s hard to believe that it’s only been one month. But oh, what a month it has been!

I’ve heard that the first three months (“the fourth trimester”) are all about survival: Just doing what you need to do to make it through each day and night. Honestly? That thought makes me sad. So even before Miles was born, I knew I wanted it to be different for us. I knew I wanted to be present; to soak in the happy moments and embrace the challenging moments with as much love and patience as I could possibly summon. And you know what? We’re doing much more than surviving over here. I’d even venture to say that we’re thriving!

Miles has an incredibly sweet and calm demeanor. He’s still pretty sleepy, but has one or two very alert times each day–often in the morning and early evening. During those times, he’s perfectly content hanging out and quietly drinking in the world around him. I just sit back and watch him take it all in. I try to remind myself that there will be plenty of time for books, songs, toys, and more as the amount of time he spends awake during the day increases over the next few weeks and months.

I imagine it’s typical of most newborns, but I feel grateful that when he cries it’s always for a reason that I just need to figure out and fix. He’s either hungry, needs a diaper change, needs to be burped, or wants to be held. At first it was all trial and error, but I’m getting better at anticipating which one it is. Thankfully, once I’ve solved the issue he stops crying immediately. I’m not yet able to distinguish one type of cry from another, but I’m sure I’ll get there eventually. 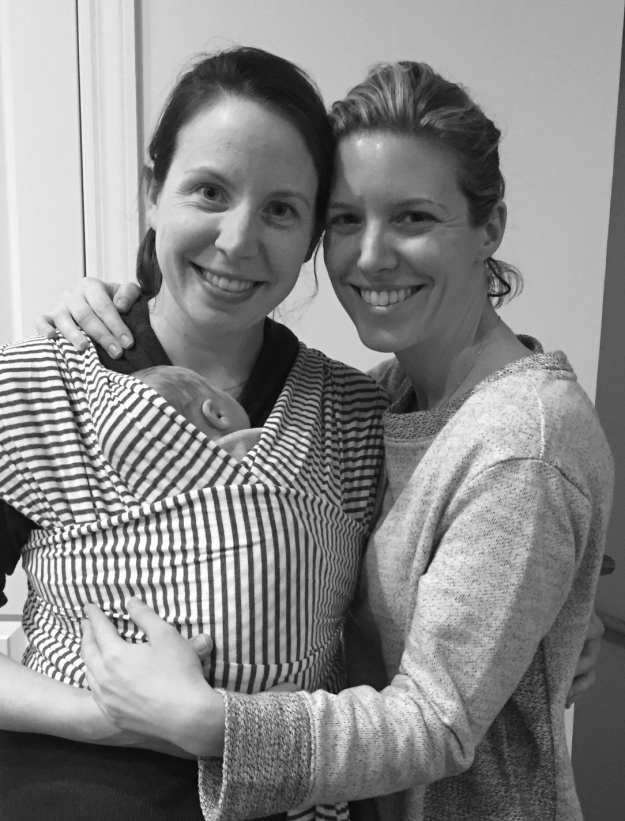 I also feel lucky that so far he loves being worn because I always hoped to do a lot of babywearing. My sister gave me a Solly Baby wrap for my shower and it’s one of my favorite baby items. I put Miles in it in the evening when he gets a little fussy and he almost always conks out. I’ve even eaten dinner with him in there. I love that sometimes all he needs in the world is me. What a feeling!!! I can’t wait to try out other carriers as he gets bigger and I know Robert is excited about wearing him, too.

Our sweet boy is growing like a weed! At first, all of his newborn clothes were giant on him. My sister sent us three preemie outfits, which were pretty much all he wore for the first 2.5 weeks. Then, all of a sudden, one day he couldn’t straighten his legs in them any longer and so it was onto his newborn clothes. Now, some of the arms and legs of his newborn onesies seem like they’re getting a little short. I thought I’d feel some sadness over the loss of his newbornness as he got bigger and bigger, but, for the most part, I feel happy about it. Sure, looking back at photos where his entire bum fit into the palm of my hand (he was four days old in the photo below) makes my heart ache a little. But his biggest job in life right now is to grow and my biggest job is to make that happen so it’s incredibly fulfilling to watch it happen before our very own eyes. We have his one month doctors appointment today and I can’t wait to find out how much he weighs at four weeks old.

Thriving though we may be, if I had to sum up our first month in one word it would be hard. The thing is, it’s been hard in ways I never imagined it would be. Before Miles came along, I assumed that the most challenging part about life with a newborn would be the lack of sleep. I hope I don’t jinx myself (I almost don’t want to type this…), but I’m actually getting a decent amount of sleep–about five to seven hours per night. It’s fragmented into two to three hour chunks at a time and is lighter than I’m used to (I’m totally that new mom who wakes up to make sure her baby is breathing), but I’ve been pretty functional on the amount of sleep I’ve been getting. I also try to get one nap each day, often in the late afternoon or early evening (more on that in a moment). We had every intention of putting Miles in his crib from day one, but he was so new and so tiny that I couldn’t do it. So he sleeps in a Pack ‘n Play Newborn Napper right by my bedside for now.

So what’s so hard about newbornhood? I think it’s the fact that it feels like I’m using every single brain cell every second of every day. I’m basically on all the time and in ways I never was before. Even while I’m folding laundry or writing this blog post while he naps, my mind is completely focused on Miles and anticipating his next need. At the end of the day I’m exhausted not because I didn’t get enough sleep, but because I’m mentally zapped. And it continues through the night and into the next day and so on. I imagine this will lessen over time (maybe?) as more of this stuff becomes second nature and doesn’t feel so new. However, I’m also aware that things change so much from one week to the next, so perhaps this state of being on is our new normal…or the essence of parenthood.

What else I’ve found to be hard are the evening hours. While I thankfully haven’t experienced PPD or anything close to it, I get a little blue during the evenings from about 5pm until bedtime. I think a lot of it has to do with the fact that Miles was born during Robert’s busiest time at work (he’s a CPA), so it’s often me and the baby all day and all night long. By the early evening I’m ready to have another set of hands so I can do some of the activities I used to do that make me feel like me. I miss cooking a lot, but it’s just too challenging to attempt right now (I tried. I failed. I cried.) Thank goodness for all of those freezer meals! Fortunately, some nights Robert has been able to come home in time for our pre-bed routine, which has been super helpful. Then he puts in a few more hours of work from home–poor guy.

Once I identified what was going on by about week 2, I found some things that help me get through those stretches. I’ll call my mom, run an errand with Miles, or take a nap with him on my chest (my new favorite thing in the entire world—it’s glorious!) I also know that it’ll get easier when Robert is around a lot more starting in May and we’ll find our new evening routine together as a family.

Whenever things get challenging, something that really helps ease my mind is saying to myself “this is normal.” So whether it’s a wide awake baby in the middle of the night, fussiness, or feeling lonely in the evening, knowing that it’s all totally normal and that countless women have walked this path before me is reassurance that I’m totally capable of getting through it.

In fact, that’s something that’s really surprised me during these early weeks: My ability to be a mom. Before Miles came along, I had very little experience with newborns or babies. In the past, whenever I would hold a baby or play with one or care for it in any way, I always felt super awkward. I had no clue what I was doing. But for some reason, with Miles, I feel totally capable. Even if I’m doing something I’ve never done before, which is pretty much everything, I feel a sense of calmness and confidence. I probably don’t do everything exactly right, but I try to approach each new situation with common sense, safety, and love. So far it’s working out extraordinarily well.

Ultimately, watching Miles grow and thrive, getting to know his little personality and witnessing it develop each day, and relishing in his newborn noises and snuggles make even the hardest parts of life with a newborn so, so worth it. I wouldn’t trade a moment of it for anything in the world.

When I was pregnant, Robert and I often joked that I was excited about having a baby because it meant that I’d have an excuse to not leave the house for a while. As a total homebody I felt that I wouldn’t have a problem being at home all the time and was even looking forward to it. So I’ve been really shocked that I eagerly seek opportunities to get out of the house at least once a day. I don’t think it has anything to do with going stir crazy. I think it has more to do with finding an activity to break up the repetition of diaper changes, feeding, and napping that make up most days. Of course, connecting with others helps keep me sane, too : ) I think I also like the challenge of figuring out how to time and execute our little outings while Miles is asleep. I’m much braver than I ever imagined I would be! So whether it’s meeting up with other new moms, running an errand, getting a pedicure (yep, I did that at 2.5 weeks!), or going on a long walk, I try to have at least one outing per day.

I’ve also learned that if I don’t shower, brush my teeth, or get dressed early in the day then it likely won’t happen at all. So as soon as I’m done feeding Miles in the morning, I put him in the Rock N’ Play in the bathroom while I take a shower. Accomplishing these tasks increases the likelihood that we’ll make it out of the house at some point. And let’s be real—there’s no hair drying or makeup applying and I live in yoga pants just like I always have.

Finally, what’s also surprised me about the first month of motherhood is how quickly my body has healed. I’ve read enough birth stories to know that I’m nothing short of lucky with my labor and delivery (and, achem, the fact that he was less than 5 pounds…) But I’ve felt 100 percent since 10 days postpartum. Around that time, the weather warmed up to over 50 degrees and Miles, Remy, and I started taking four-mile walks almost every day. In true Chicago spring fashion, the temperature dropped and it snowed this past week, but I’m looking forward to getting back outside with him again. I also can’t wait to get back to the yoga studio in a few weeks, too!

I could write a short novel about our first month (and already have), but I’ll stop myself here and wrap up with 10 things I’ve learned during Miles’ first month of newbornhood and my first month of motherhood: